As a continuation to our report on Coronavirus (see here), we write an update on the pandemic as its impact on global economy continues to escalate. With over 118,000 reported cases as at the time of this report and about 4,292 reported death cases from the virus, we think the world may be on course for a global recession as economic and social activities slow down.  We see the virus outbreak as a major catalyst for a global economic meltdown. While major central banks remain dovish to support economic activities (Fed cut rate by 50bps, the highest rate cut since 2008), we think this may not be sufficient to save the global economy from a significant downturn.

To add to the woes of oil exporting nations, who have suffered significant loss in revenue on the back of the impact of coronavirus on oil demand, the inability of the OPEC, led by Saudi Arabia and its allies, led by Russia, to reach an agreement on the additional production cut or even maintain the current cap beyond March 2020. This led to 31% loss in Brent to around US$33 per barrel, the highest daily loss since the Gulf war in ‘98. With Saudi Arabia and Russia engaging in a price war, we think oil may face a similar oil glut of H2 2014 – where Brent oil fell from US$112.36 per barrel in June to US$57.33 per barrel in December 2014, due to oversupply of crude oil from US and Canadian tight oil (shale oil), geopolitical rivalries amongst oil-producing nations and falling demand across commodities markets due to the deceleration of the Chinese economy. 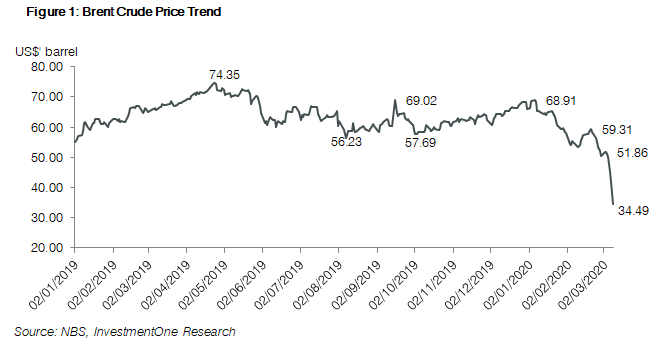 As a result of the impact of coronavirus on global economic activities, major equities market have witnessed significant sell-offs as Dow Jones, S&P, CAC, FTSE 500, DAX and Shanghai stock indices have significantly lost in the last few trading days. We expect this to continue as economic and business activities are closed down because of the outbreak of the virus which poses a major risk to the global economy. On the back of this, investors are now running to safe havens with the yield on US10yr treasury hitting an all-time low level, below the 2008 global recession level.  Similarly, gold prices and Yen have been recording decent gains in recent weeks as investors run to less risky assets. 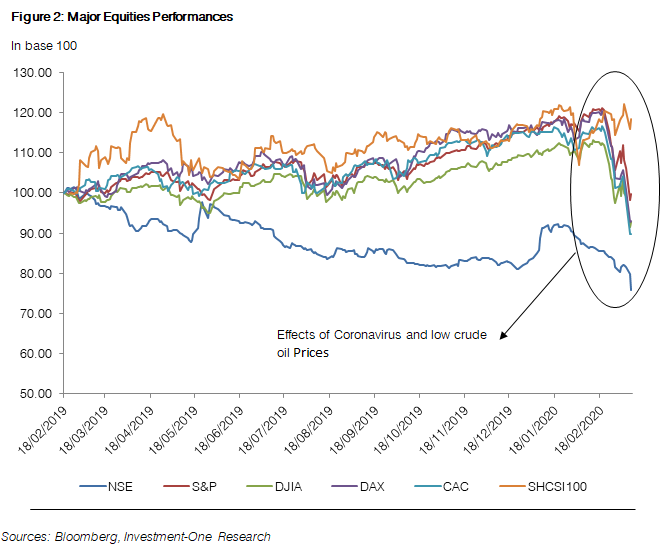 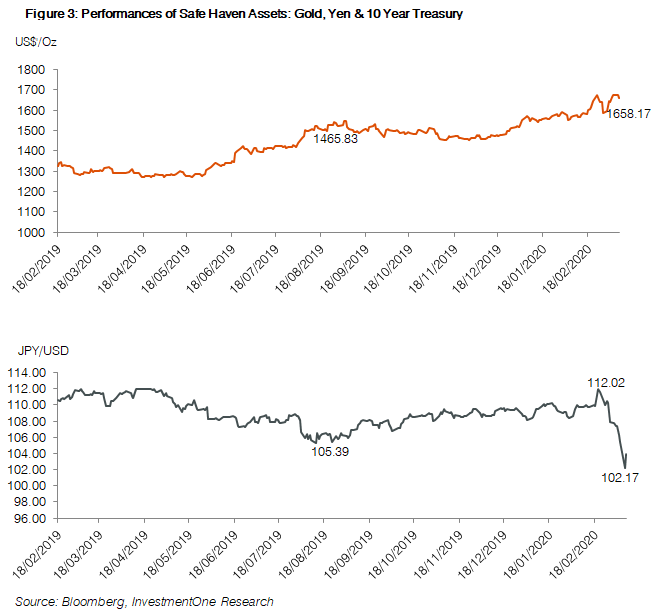 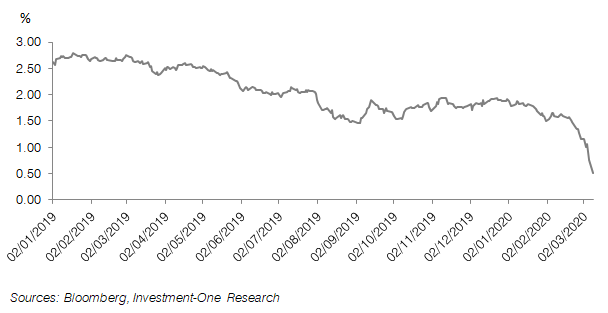 What is the fate of Nigeria?
Devaluation Knocking at the Dooe
Unfortunately for Nigeria, we do not have enough buffers like Saudi Arabia and Russia with a Sovereign Wealth Fund of US$320billion and US$124billion respectively as well as External reserves of c. US$501billion and c. US$570billion respectively. With oil currently below the devaluation trigger point of US$45 per barrel and offshore investors reducing their exposure to emerging and frontier market, we think CBN’s ability to maintain its FX stance is significantly constrained as oil remains a major source of the nation’s dollar inflow. In the same vein, on the back of the weak dollar inflow, we may see foreign investors’ flight to safety elevated in the near term, as both local and global macroeconomic environment remain weak. We have already witnessed slight depreciation in the naira vis-a-vis the dollar in the parallel and the I&E window and we expect the trend to continue with speculators taking position. This may continue until the CBN shifts on its monetary policy stance and responds to ameliorate investor’s fears of an impending devaluation. 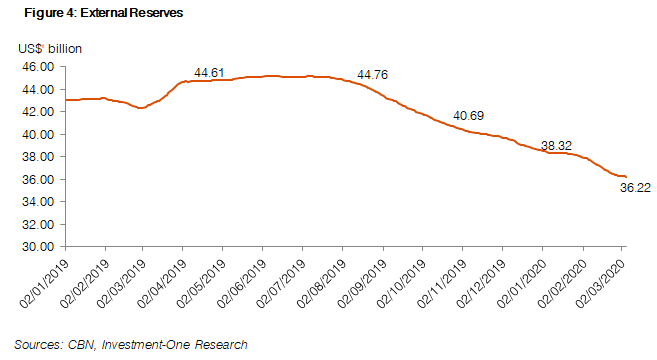 What can CBN do?
At this stage, we believe the major tools that CBN can apply to stem these outflows are:

We think CBN may likely use these tools in the order stated above, as such, we see devaluation as the last option that CBN may adopt based on the Apex bank’s precedence on FX management. 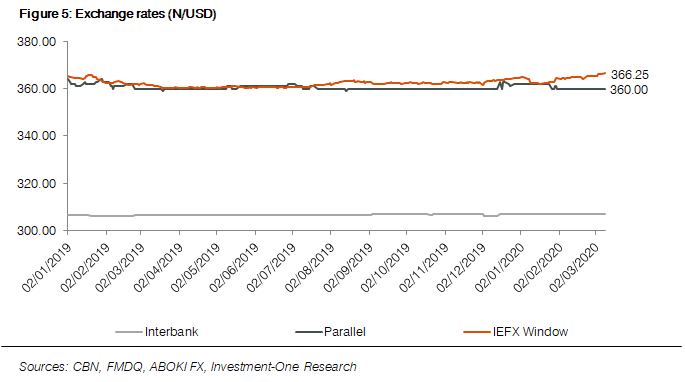 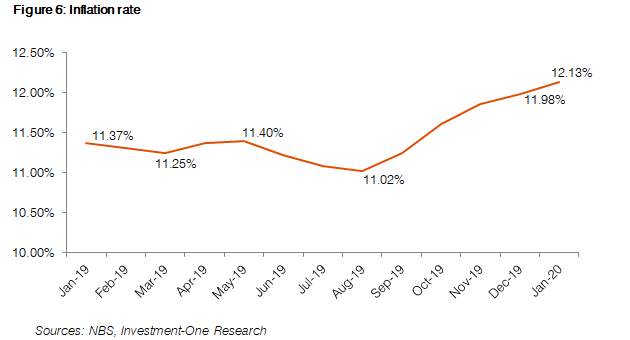 Government Finances Likely To Take a Hit
With the nation still depending on oil revenue (31.3% of 2020 revenue target) to implement the N10.59trillion budget, we believe the nation’s budget implementation may suffer a huge blow with the benchmark for oil set at US$57 per barrel and production at 2.18mbpd. While the breakdown of OPEC and its allies cartel suggests Nigeria can increase its oil output without constraint to its budget target of 2.18mbpd, we think the limited investment in oil and gas coupled with continuous delay in signing the Petroleum Industrial Bill could limit the nation’s oil output in the long run. On the back of the aforementioned, we think 2020 budget may be reviewed to reflect the current economic reality. While the adjustment may affect the capital expenditure (N2.78trillion) which is discretionary, we think revenues from other sources and oil may not be sufficient to meet non-discretionary expenditures (N7.29trillion for Recurrent Non-debt and Debt Servicing). With just US$75million in the nation’s excess crude account which is meant to support budget in situations like this , it would be far-fetched to presume that the nation does not have enough reserves to meet its obligations without increasing its borrowing. It is pertinent to note that actual Federal Government oil revenues in FY 2018 and 9M 2019 were just N1.96trillion and N1.44trillion when Brent averaged US$71.05 per barrel (at production level of 1.93mbpd) and US$64.75 per barrel (at production level of 2.02mbpd) respectively. On the back of this, we think the nation’s oil revenue may decline significantly in the near term. Similarly, this could have significant impact on states; most states are overdependent on FAAC allocations to fund recurrent expenditure with IGR still very low and the obligation of the recent minimum wage increase.

Equities Facing the Brunt of the Virus
With the weak global economy and potential for devaluation in Nigeria, we think investors may continue to run away from risky assets particularly equities. As such, the current downtrend in equities market may continue as investors try to preserve wealth amid heightened risk.  Nonetheless, investors should not sell in panic but rather be strategic about their decisions to sell. We believe equities market is in cycles and the bearish period will not last forever. As such, we opine that this may be one of the best periods to start cherry picking some of the quality names with a medium to long term horizon. 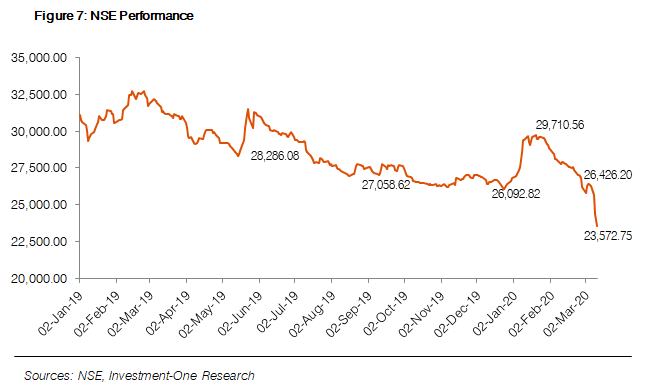 ..it is your right to play on the worldstage!